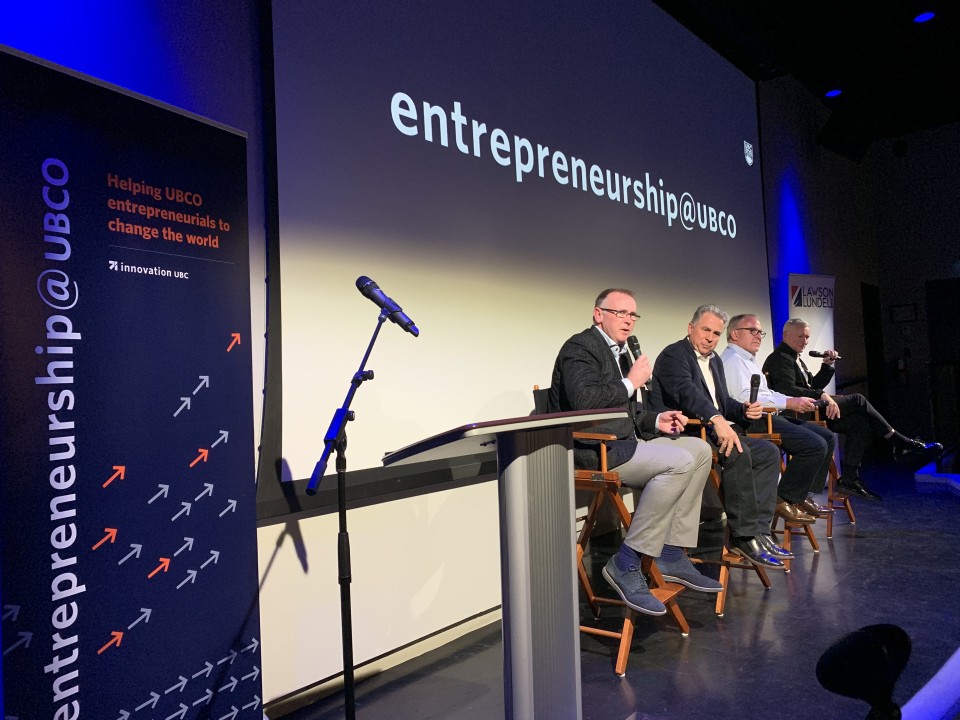 Successful CEOs are a special breed.  They think outside the box.  They are relentlessly but realistically optimistic.  They take calculated risks.  They are relationship builders with great listening skills.  They are excellent at pitching their company and ideas.

Successful CEOs – who craft world-class wines – as each of the speakers at our recent Entrepreneurship@UBCO’s Leadership Forum do – are in a rare league of their own. They are true mavericks.  You can travel the west coast through the 280 wineries in the Okanagan down through the 500 wineries in the Willamette Valley, the 400 in Napa, the 425 in Sonoma to the 75 in Valle de Guadalupe in Mexico – and you will discover that it’s not easy to make world class wines.

Why?  Because winemaking is an art as well as a science – and it’s very capital intensive.  Add to that the complexities of weather – fires, floods, unrelenting heat or too much rain, pests, disease and – let’s just say – it’s not the romantic dream that you might be fantasizing about.

An article in The Wall Street Journal on August 31, 2019 entitled “Europe’s Winemakers Break With Tradition as Temperatures Rise” illustrates the challenges in Europe: “Winemakers are harvesting grapes more than a month ahead of schedule, sometimes in the middle of the night when temperatures are cooler. Some French winemakers are planting hardier grapes and re-evaluating some of the more sensitive—and celebrated—varietals such as Riesling and Merlot. In Italy, some are relocating vineyards uphill, where microclimates are cooler, and are experimenting with new technology. In Germany, production of the French classic Merlot has more than tripled in the past two decades, as the weather warms. Researchers across the region are investigating whether it’s possible to take advantage of climate change by shifting more wine production to Northern Europe, but they are also running into hurdles. Climate instability across the continent has heightened uncertainty over quality and annual yield.”

We hosted 130 business leaders, researchers and entrepreneurship@UBCO Accelerator team members at The Innovation Centre for a fascinating discussion by CEOs from four of the region’s leading wineries about today’s challenges and complexities of building a world class winery and wine region.

It’s a region that is gaining a place on the international stage – thanks to the direct efforts of our speakers as a recent article in The Financial Times by Jancis Robinson – one of the world’s most influential wine critics illustrates:

“The collaborative and creative spirit that fueled Napa’s pioneers is certainly evident in BC today. While they may seem to be generating new appellations a little faster than world-beating wines, decisions are being made with the full consultation of everyone involved – and the wines are increasingly impressive.”

It was also valuable to hear how this region stacks up against others and to explore how UBC Okanagan and the industry can collaborate to further our region’s drive for quality and sustainability.

This area is a vital focus as an article in USA Today called “Climate change is coming for your wine. What the world’s wineries are doing to save grapes” on September 12 amply illustrates: “Measures include extensively shading the vineyards, developing cover crops that can help with either drought or flooding, and planting experimental rootstocks – the foundational root that lies below the ground – that may be better suited to higher temperatures…Fires damaged some California wineries in recent years, and the smoke, if dense and persistent enough, can permeate the berry and alter its flavor.”

It was clear all four of our speakers from the event had several personality traits in common:

Our first speaker of the evening, Dr. Tony Holler has headed 11 different companies.  Before his business career he served as an emergency physician at University Hospital at the University of British Columbia and holds a BSc and MD from UBC.  He is currently Chairman of CRH Medical, Founder and CEO of Sunniva (Cannabis) Inc. and heads Poplar Grove Winery.

Previously, Tony was co-founder of ID Biomedical Corporation and CEO when the company was acquired by GlaxoSmithKline in December 2005 for $1.7 billion. He was also Chairman of Corriente Resources Inc., which sold for approximately $700 million to CRCC-Tongguan Investment Co. in 2010.

John Skinner, owner of Painted Rock Estate Winery was our second speaker. He retired as stockbroker in 2009, at the age of 39 after a career as a Senior Investment Advisor in Vancouver with Yorkton Securities and then Canaccord Capital Corp. He and his wife Trish have a great passion for fine wines and they began searching in 2001 for the best property in the Okanagan to develop a winery – and to apply the very best global practices.  In 2004 he and his wife found the 56 acre “BlackHawk” property on Skaha Lake in Penticton – the center of what was once known as the largest apricot orchard in the British Commonwealth.

John is President of the Okanagan Wine Initiative, a group of 8 of the region’s wineries that produce enough capacity for export – including Poplar Grove, Checkmate and Martin’s Lane – the latter two part of the von Mandl’s Family’s Sebastian Farms group. He has been leading the effort to successfully build international markets and a stellar reputation from top global wine critics for the Okanagan wine region.

John is also leading a federally and provincially backed initiative to build an Okanagan Wine Excellence Institute that will provide the Okanagan Valley with the research, education and industry support that the Department of Viticulture and Enology at UC Davis, the Cool Climate Oenology and Viticulture Institute at Brock University or the National Wine Centre at the University of Adelaide provide the wine regions they are located in.

Darryl Brooker then took to the podium. Darryl is President of Mission Hill Family Estate in West Kelowna and Sebastian Farms – the von Mandl Family’s collection of exceptional estate vineyards located throughout the Okanagan Valley.  He joined Mission Hill Family Estate as chief winemaker for the 2015 harvest following his successful five year tenure as lead winemaker at CedarCreek Estate Winery which is part of the Sebastian Farms group.

Prior to this, he began his 20+ year career in wine-making at Mountadam Vineyards in Barossa Valley, one of Australia’s pioneer Chardonnay makers, followed by senior wine-making roles at Villa Maria Estate in Hawkes Bay and Marlborough, New Zealand.

Finishing up the evening was Alain Sutre, a world renown viticulture and wine making consultant based in Bordeaux France. Here in the Okanagan he consults for five wineries including Culmina Family Estate Winery, Painted Rock and Poplar Grove.  He is also – and this is where things get very interesting – an tech entrepreneur.

Alain commits fifty percent of his revenues to research and development to add functionality to the platform and his combined roles demonstrate the vital role that technology and in particular data can play in every industry to drive quality and sustainability.

Entrepreneurship@UBCO’s Leadership Forums are exclusively sponsored by Lawson Lundell LLP and designed to feature CEOs who have a story to tell that will benefit UBCO-related entrepreneurs who are undertaking customer discovery, developing a business model and building a product or service. The goal is to demonstrate how these concepts are applied in the real world.  We also set aside time for questions and invite the business community to join us when we have space available.